I have been waiting since 2006 for this day to come. As from the 20th of March we have had a Howler Monkey (Alouatta palliata ssp. aequatorialis) residing in the canopy of the forest in the Arboretum. Finally Selva Chi feels like a nature reserve. He can be heard several times a day with his baritone growls and hoots, usually in the first few hours of daylight. On the 6th of April he came within 5m of the house in the Mamey tree. Have not been quick enough to get a photo of him yet. The below photo was taken from the internet to demonstrate. Around the same time several rats moved into the house, but the evening of the the 6th saw a Boa move in and polish off one of them. The photo shows him waiting for the rat to pass by. Never a dull moment in the forest! 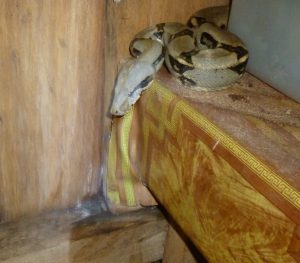